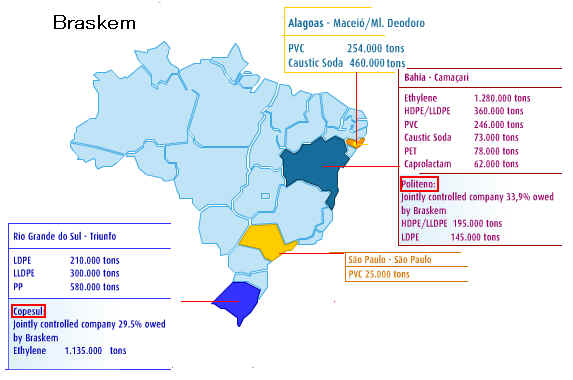 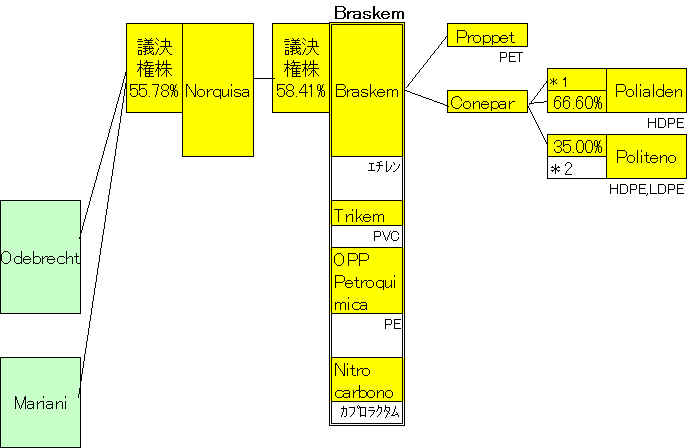 Copesul Located in Triunfo, a county of the state of Rio Grande do Sul

Classified as a large-size cracker, Copesul produces about 40% of ethylene consumed in Brazil, nameplate capacity of 1.135 million tons/year. Besides ethylene, its main product, Copesul produces propylene, butadiene, benzene, toluene, xylenes, MTBE, butene-1, propane, and others, a total of 3 million tons per year of petrochemicals. More than 80% are consumed in South Petrochemical Complex. Remaining products are sold to other Brazilian states or exported.

Latin American leader in the production of polypropylene resins and the 2nd largest producer of thermoplastic resins in Brazil.

The Company has a production capacity of 625 thousand tons/year of polypropylene distributed within its three facilities located in Maua (State of Sao Paulo), Duque de Caxias (State of Rio de Janeiro) and Camacari (State of Bahia).

Suzano Petroquimica is a joint controlling shareholder of Riopol and Politeno, polyethylene producers, and Petroflex, synthetic elastomer producer; both products are raw materials for the converters, as the polypropylene (more details at Suzano´s Groups section). 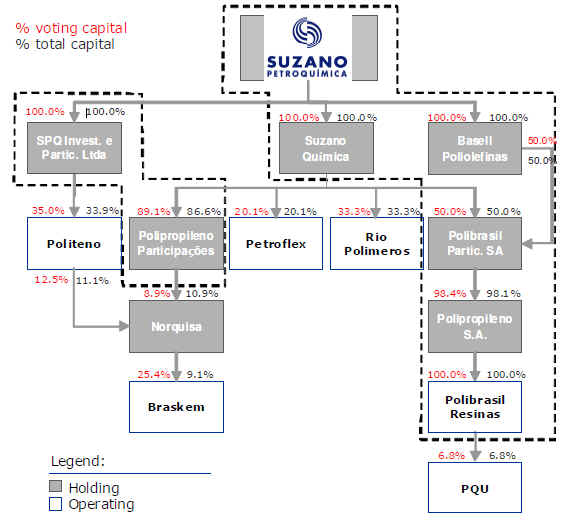 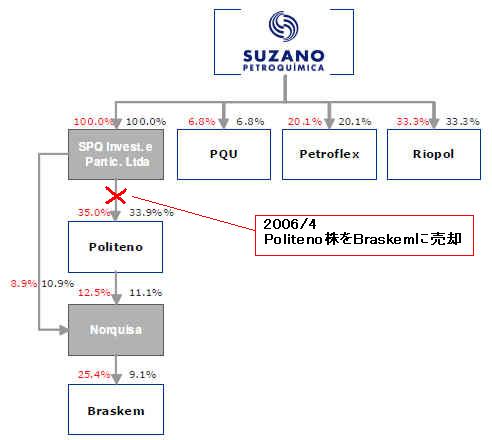 Riopol was created in 1996 to implement a grand project, the Rio de Janeiro Gas-Chemical Production Complex, in the vicinity of the Duque de Caxias refinery - Reduc, owned by Petrobras. The Complex was inaugurated on 23 June, 2005 and is comprised of two units - an ethane and propane pyrolysis unit, with installed capacity of 520 thousand ton/year of ethylene, and another unit producing high density (HDPE) and low density (LLDPE) polyethylene, with installed capacity of 540thousand ton/year.

In November 1980, the DBN I (Debottlenecking) project was completed, increasing ethylene production from 300 thousand to 360 thousand tons per year. now 500

The High, Medium and Linear Low Density Polyethylenes (HDPE, MDPE and LLDPE), besides Polypropylene (PP), are produced in the five industrial plants in the Petrochemical Complex of Triunfo-RS.

Ipiranga Petroquimica was founded in 1976 and it was first called Polisul Petroquimica. Hoechst (Germany), Petroquisa (state owned company) and Empresas Petroleo Ipiranga (one of the largest private company in Brazil) were the only Polisul shareholders.
It was in 1992 that Ipiranga and Hoechst bought Petroquisa's shares, taking over the control of Polisul. By that time, each shareholder had 50% of the company.

By the year 1997, Hoechst shareholders decided to focus their investments in science and health business. That was the opportunity when Ipiranga bought Hoechst shares and the name Polisul Petroquimica was changed to Ipiranga Petroquimica (now 100% owned by Empresas de Petroleo Ipiranga).

The petrochemical site of Triunfo (South Brazil) has many companies but Ipiranga was the first one to start up in 1982 (together with the cracker - COPESUL). It first began with a HDPE 60.000 ton/year capacity.

In 1990, a second industrial plant was built and it raised the HDPE production capacity to 220.000 ton/year.

The third unit to start up was built in 1996, reaching 350.000 ton/year HDPE production capacity.

The birth of UNIPAR is entwined with the origin of the petrochemical industry in Brazil, ? and consequently with an important part of the country’s History.

When the Federal Government opened up the importation and processing of crude oil to private enterprise, Refinaria União was a pioneering enterprise which, for two decades, became a landmark not only because it processed 20,000 barrels per day and employed the most modern technology in the sector, but especially because it trained hundreds of high-level technicians in specialties that had not existed in Brazil up to that time.

It was these new professionals who employed all their knowledge in the installation of the first Petrochemical Complex in Brazil, a successful enterprise of the União Group, which would later give rise to UNIPAR-União de Indústrias Petroquímicas S.A. With the inauguration of Petroquímica União (PQU), in São Paulo, Brazil started producing ethylene, propylene and other raw materials for second generation industries. In addition to Petroquímica União(PQU), Poliolefinas, Carbocloro, Empresa Brasileira de Tetrâmero, Brasivil-Resinas Vinílicas and Copamo-Consórcio Paulista de Monômero were part of UNIPAR’s very significant initial assets.

Meanwhile, UNIPAR has become a Group of ten distinct businesses and a listed corporation, which, among other projects, is taking part in the installation of the first Gas-Chemical Complex in Brazil: Rio Polímeros, in Duque de Caxias, State of Rio de Janeiro, which is expected to start up in 2004.

Chevron Phillips Chemical's proprietary loop slurry PE technology will be employed in a new 200,000 metric tons per year reactor that is part of Polietilenos Uniao's strategic PE expansion at its plant in Santo Andre, Sao Paulo, Brazil. The facility is expected to startup in 2007.

The new plant which will produce HDPE/LLDPE and will go onstream by mid 2007, more than doubling Polietilenos União's PE capacity. (2005/1)

Unipar's expansion project is to increase the installed capacity of the ethylene plant at subsidiary Petroquimica Uniao (PQU) by 200,000 tons a year (t/y) to 720,000t/y.

The expansion would reportedly need 350,000t/y of gas and 200,000t/y of naphtha, which Petrobras should be able to provide from its Recap (Capuava) and Revap (Henrique Lage) refineries.

Petrobras Quimica S.A - Petroquisa
PETROQUISA, Petrobras subsidiary, was incorporated by Decree no. 61.981, dated December 28, 1967, to develop and consolidate the chemical and petrochemical industry in Brazil. The purpose of the company is to participate in companies operating in the manufacture, trade, distribution, transportation, import and export of chemical and petrochemical products, in general. Moreover, it can perform all the aforementioned activities directly. After its incorporation, three petrochemical complexes were built - in Sao Paulo, Bahia and Rio Grande do Sul.

PETROQUISA also has interest in six other operational firms, as well as in Rio Polimeros S.A., affiliate responsible for the Rio de Janeiro Chemical Gas Complex, a project under construction next to Duque de Caxias refinery in Rio de Janeiro.

Petroquimica Triunfo
In May, Petroquisa exercised its preemptive right to acquire the shares held by Primera (part of the Dow-Quimica group) in Petroquimica Triunfo’s capital. On the conclusion of this operation, Petroquisa’s stake in the voting capital was increased from 45.22% to 60.63% and corresponding to 80.07% of Petroquimica Triunfo’s total capital. Petroquisa disbursed approximately US$ 25.5 million for this additional stake.
Subsequently, Petroquisa acquired the remainder of Primera’s stake in the company given that the other partner, petroplastic, decided not to exercise its preemptive rights.
As a result, Petroquisa’s final participation in the company was increased to 70.45% of the voting capital and to 85.04% of the total capital, the company disbursing a further US$ 32 million.

Rio Polimeros S.A. (Riopol) a company owned by Suzano (33.3%), Unipar (33.3%), Petroquisa (16.7%) and BNDESPar (16.7%), is concluding the construction of a new petrochemicals plant in Duque de Caxias, state of Rio de Janeiro.
With operations scheduled to come on stream in the fi rst half of 2005, Rio Polimeros will have an annual production of 515 thousand tons of polyethylene with various specifications and 76 thousand tons of propene, using as raw materials ethane and propane extracted from Campos Basin natural gas. The total investment is estimated at US$ 1 billion

Largest producer in Latin America, and sixth in the world, Petroflex holds today approximately 80% of market share in the Brazilian elastomers market. It has 3 industrial units: Duque de Caxias, State of Rio de Janeiro; Triunfo, State of Rio Grande do Sul and Cabo, State of Pernambuco, all certified by ISO 9001, ISO 14001 and OHSAS 18001 standards, amounting to a total installed capacity of 410 thousand ton/year. Petroflex exports approximately 30% of its production to over 70 countries.

Created by Petrobras in 1962, Petroflex was the first petrochemical company to be privatized in Brazil, in 1992, as part of the National Privatization Program (PND). Petroflex is controlled by Suzano Petroqui'mica(20.1%), Braskem(20.1%)and Unipar(10.1%), which hold, together, 50.3% of the total capital.

Synthos announces its plan to invest in Brazil

Synthos S.A. is planning to build a neodymium polybutadiene rubber plant in Triunfo Petrochemical Complex in Rio Grande do Sul.

Synthos S.A. is planning to build a neodymium polybutadiene rubber plant in Triunfo Petrochemical Complex in Rio Grande do Sul. The investment will be carried out provided that the 2013 contracts on raw material supplies will come into effect.

Upon the implementation of those contracts, the company will build a modern production plant producing neodymium polybutadiene rubber (NdBR) used to manufacture high-performance car and truck tires and various technical rubber products. The plant capacity will reach 80,000 tonnes per year, which will result in a huge production growth of elastomers in Brazil and will replace a significant part of the current import.

“Considering the growing demand for synthetic rubber in Brazil and other South American countries, we will not aim at replacing the local production, but try to substitute the import into the region,” said Tomasz Kalwat, CEO, Synthos S.A.

The production of polybutadiene rubber in Brazil will be based on the license granted by Michelin.

Synthos has signed contract agreements with tire manufacturers Michelin and Pirelli regarding the supply of NdBR to their facilities in Brazil.

The time remaining until the implementation of contracts will be dedicated to the preparation of the necessary documentation (including project documents) without incurring substantial financial liabilities.

Brazil is the world’s seventh economy and the largest economy in South America. It is one of the emerging markets with high growth potential. Synthos S.A. continuously emphasises its presence on that market. In 2012, our rubber export to South America amounted to 3.3%, and in 2013 it reached 6.3%.
According to the Polish Foreign Market Research Lab, in the first three quarters of 2013, the sales of tires for new cars in Brazil increased by 9%. The replacement tires market  increased by 11% as compared to the previous period. Thus, the Brazilian market and other South American economies are highly attractive.

October 5th, 2008 - Dwory S.A. sign a licensing contract with the Michelin company for the purchase of polybutadiene rubber production technology.
At the same time, a commercial contract for deliveries of this type of rubber to Michelin is signed for a period of at least seven years from the start of production. Polybutadiene rubbers produced according to the neodymium technology purchased from Michelin are among the newest generation of rubbers used to produce tires with improved safety standards, including tires made for higher speeds.

October 23rd, 2007 – The Chemical Company changes its name to Synthos S.A. The assumption of a new name is an effect of organizational changes related to the finalization of the acquisition process of the Czech company, Kaucuk a.s. 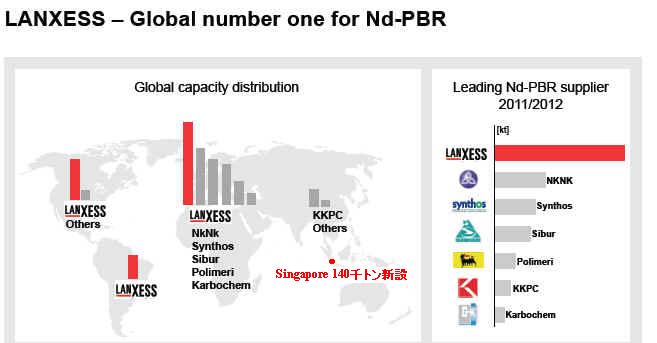 NKNK(Nizhnekamskneftekhim) is one of the biggest producers and exporters of petrochemical products in the Russian Federation.
KKPC:Kumho Petrochemical
SIBUR Group はGAZPROMが100%出資するロシア最大の垂直統合石油化学会社
Polimeri Europa：ENI 100%
Karbochem (Pty) Ltd is a South African manufacturer of various types of synthetic rubber